INDIAN YELLOW - HOW IT WAS ORIGINALLY MADE 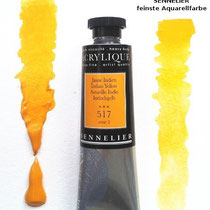 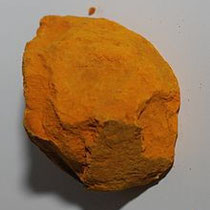 IINDIAN YELLOW is a fascinating color : bright , translucent , a warm, sunny tone that is an integral part of the painting today .

But where does the name of this beautiful reddish- yellow hue come from?

The former is easily explained - from India, probably from what is now the state of Bihar , situated between the Himalayas and Calcutta.

To determine the origin of the pigment which was shrouded with rumors and secrets for a long time as nothing was known about it. From Calcutta, these lumps of thickened substance arrived to England. The smell was very peculiar to unpleasant, which caused speculation about the base. Suspicions were that it had to be of animal origin !

Rumor has it that the raw material is from the urine of Indian cows that were fed with mango leaves over a longer period and had their fluid intake decreased. Thus the urine is colored bright yellow. The collected liquid was boiled for hours until said consistency was formed and made into balls and then sold.

The process was allegedly declared inhumane and outlawed in 1908, as the cows were extremely undernourished, partly because the leaves contain the toxin urushiol which is also found in poison ivy.

Today, this dye is artificially or from plants ( Reseda luteola )  - so do not worry ! No animal were and ever will be harmed just to produce this colour.

Indian yellow was used by artist painters in both oil paintings and watercolors. Due to its fluorescence, it is especially vivid and bright in sunlight. It was likely first used by Dutch artists, and before the end of the 18th century it was commonly used by artists across Europe.